Book One:  "The Dark Knight Returns" 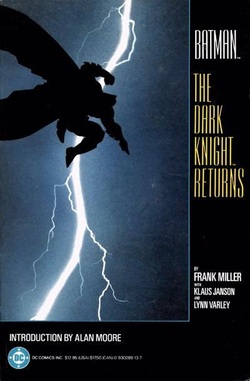 Courtesy of DC Comics
The story of Batman:  The Dark Knight Returns opens with Bruce Wayne, the famous million heir of Gotham, in a car race that ends in crash.  The car is enveloped in flame, but he escapes.  Gotham is in a heat wave, and it has been ten years since the last sighting of the Batman.   According to the newscast, that is a prominent part of the narration throughout the story, a recent poll reports that most teenagers think Batman is just a myth or urban legend.  The long standing James Gordon is still the Commissioner of Police, and a new gang, that call themselves the Mutants, have vowed to kill him.
Bruce and Jim have drinks, celebrating the retirement of Batman.  It is apparent that Jim knows that Bruce was Batman, and he mentions Jason.  Jason was the last Robin, and dies.  Bruce takes his leave after the topic is brought up, and walks home.  He states that, "I walk the streets of this city I'm learning to hate, the city that has given up, like the whole world seems to have.  I'm a zombie.  A Flying Dutchman.  A dead man, ten years dead..." (Miller 12).
Bruce thinks about his other side, Batman, and how he is showing him these streets of crime.  He is attacked by muggers, but they quickly leave when they realize he will put up a fight.  Bruce becomes lost in his thoughts of how crime is everywhere, rampant, and how they are a "purer breed" (Miller 14).  The temperature, like the crime, is still on the rise.
Dr. Wolper is introduced as a psychiatrist who has assisted in the reform of Harvey Dent, who is also known as Two-Face, at Arkham Asylum.  Dent makes a public statement saying that he will commit himself to public service for his crimes.  The next day, Dent has escaped and Gordon issues a warrant for his arrest.
Bruce Wayne is up late, due to nightmares and has flashbacks from his childhood.  A young Bruce falls into what is now the Bat Cave, and meets the bat that changed him forever.  He comes to his senses and is in the Bat Cave, and everything is draped and covered like an abandoned house.  He is struggling to keep Batman under control.  Alfred brings finds Bruce in the cave and points out that his mustache is shaved off.  However, Bruce does not remember doing it.
While drinking Bruce hears the news of a cold front quickly moving in, and he relives the murder of his parents when The Mask of Zorro comes on the television.  He zones out, but comes back to his senses when the news comes back on listing numerous crimes that are happening in Gotham.  He stumbles to his office, and listens to the answering machine.  Clark Kent, Superman, says he will be out of town, Selina is lonely and misses Bruce, and Harvey thanks him for his support...just as a bat crashes through the window.
On the streets of Gotham a mugging is stopped, a prostitute is saved from being cut to bits by her pimp when a gloved arm appears, and two girls, one of which is Carrie Kelly, are saved from the Mutants by a masked man.  The news reports that "a large bat-like creature" has been spotted (Miller 32).  Batman appears during a car chase, and narrates that, "This should be agony. I should be a mass of aching muscle — broken, spent, unable to move. And, were I an older man, I surely would... But I'm a man of 30 — of 20 again. The rain on my chest is a baptism. I'm born again..." (Miller 34).  The Dark Knight has returned to Gotham.  He takes down a gang of criminals, and discovers the talisman of Two-Face.
Just as Batman is seen and reported on the news, the Joker in Arkham Asylum, awakens from his comatose state.  Newscasters are having debates on whether or not Batman has returned and  what his motive is.  One this is certain, he appears to be out for blood, and crippling criminals in his path.  Gordon will not issue an arrest warrant for Batman, and the Mutants send a message that their leader will kill the Batman as well as Gordon.
The Bat Signal is shown, signaling Batman to meet with Gordon.  He tells Gordon that Dent, now Two-Face again, is out of control, and he will do what he has to to stop him.  Meanwhile, the Joker gets a visitor from a loyal follower that builds bombs.He confesses to the Joker that Dent has employed him, and that he will help the Joker escape as well.
Batman scales one of the twin towers because of a tip, and waits for Two-Face's attack.  He corners Two-Face, and sees beyond his face that was fixed with plastic surgery.  He sees his true form, his alter ego and dark side.  Batman also sees a reflection of himself.