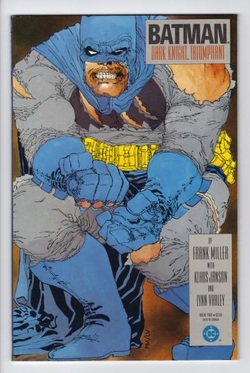 Courtesy of DC Comics
The Mutants are stalking Gordon, who is walking home, smoking and thinking of Sarah, his wife.  He is very close to his retirement, and the mayor still has not named the replacement.  Gordon shoots a member of the gang and escapes.
Carrie Kelly, one of the two girls that was saved by Batman's return, sets out into the night to seek and assist Batman.  She wears the Robin costume that she bought with her saved lunch money.  She has good timing, because Batman is on the prowl.  He rescues a kidnapped child from the Mutants, and saves one of the gang members to question while hanging him upside down from the highest tower in the city.
He discovers that the Mutants are being backed and armed by a general, Nathan Briggs, who was famous in the army.  But, when Batman tracks him down, he commits suicide.  Meanwhile, Robin is still searching for her Batman by following the mutants.
Ellen Yindel is announced as the next Commissioner of Police, and her first act is is issues a warrant for Batman's arrest.  Jim Gordon isn't pleased.  Later, at the White House, President Ronald Reagan tells Superman, Clark Kent,  his thoughts on Batman.  He requests that Superman have a talk with him before things get too far out of hand.
After discovering the location of the Mutants, near the West River bank, Batman takes his tank to have a showdown.  The Mutants fight back which only causes harm to their own kind.  The tank is invincible and armed with rubber bullets.  The leader stands before him, and call him out to fight him.  Despite Alfred's pleas and warning, Batman leaves the safety of the tank to battle.  He quickly realizes that he is not as young, agile, and tough as he used to be.  Just as the Mutant leaser is about to defeat him, Robin jumps in and buys Bruce a chance to take control.  He thinks she is Dick, his dead sidekick.  Batman prevails, but is badly wounded.  Robin assists, and helps bandage his injuries.  She introduces herself as "Carrie.  Carrie Kelly.  Robin."  and Batman reveals his true name to her (Miller 84).  They return to the Bat Cave, where he goes into the darkness and embraces the bat.  He cannot die yet because his work is far from done.  He embraces Carrie, signifying that he accepts her as the new Robin.  He will never forgot his dead sidekick, but Carrie is perfect to be the new Robin.
The Mutant leader claims that Batman begged for his life during the fight, and that they will come after Yindell next.  The mayor agrees to meet with him in an armed jail cell to negotiate a truce, despite Gordon's warnings.  The mayor is killed as soon as he enters the cell.
All throughout the city, crazed people are dressing up as Batman and standing up against crime.
Robin is sent in undercover to get information on the mutants.  Batman meets with Gordon, and they discuss how to handle the mutants.  Gordon wants to keep them all locked up, but Batman tells him that the only way to bring the gang down is to have them defeated and humiliated.  The only catch is that he needs his old friend to do him on last favor.  Gordon returns to the leader's cell, relieves the guard, and allows the Mutant Captain to escape.
Batman is waiting for the escapee at the end of the sewer line, and the Mutants gather around the brawl.  The Batman strategically takes down his enemy, blow by blow, like a surgeon at an operating table.  The Mutant gang is no more, but are now dubbed "the Sons of the Batman" (Miller 102).  This book ends with Gordon turning in his badge and gun.