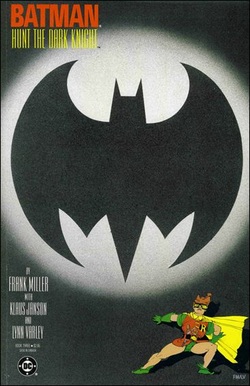 Courtesy of DC Comics
As Batman and Robin are breaking up a robbery, something that moves faster than a speeding bullet interrupts them.  Even though his superhero name is not spoken, it is Superman.  Batman tells him to meet him tomorrow.
Meanwhile, the Sons of Batman have become vigilantes themselves, and fight evil on the streets.  The Joker's plan is set in motion, and his planted bomb almost kills Robin.  Many innocents are killed.
Bruce meets Kent the next day, and Kent explains that his crusade needs to come to a halt before the President orders him to be brought in.  Bruce warns him that he will put up a fight.  Before Clark Kent can answer, he learns of Soviet attacks and is off to aid U.S. forces.
The Joker's plan is being set in motion and he is set to appear on a TV talk show.  The new Yindel is preparing herself for his public appearance and aims to keep him from escaping.  Another doll bomb is set off as our heroes near the studio.  Batman foresees a fight with the police, but he thinks that they will remember him and pay respect to his reputation.  He is mistaken, and they rush him.
The Joker, now unattended, proudly says he is going to kill everyone is the room.  Another doll enters the studio releasing the Joker's smile and laughing gas that does kill everyone.  At the same time, Batman fights off the police, but several cops must be sent to the hospital.
The Joker escapes and makes it to Selina Kyle's.  Selina is now a madame, and the Joker is interested in on the girl's guests, who happens to be a Senator.  The Joker somehow uses hypnosis to convince the Senator is commit suicide.  Batman disguises himself as a detective named O'Halloran and prods Yindel for information at the crime scene.  As he walks away, the real  O'Halloran shows up, and Yindel orders her men after Batman.
Robin and Batman make it back to Selina's, and find her beat up and tied up in a Wonder Woman costume.  Robin discovers a cotton candy cone and they both realize that the Joker is out to kills hundreds, if not thousands, at the fair.  He asks himself, "...How many more - - until I finally do it?" in reference to killing the Joker (Miller 136).
The Gotham City Police cut Batman and Robin off before they have a chance to exit the building.  They duo narrowly escapes by breaking a window and grabbing on to a glider.  Robin's strap breaks, and she doesn't make a sound as she falls.  Batman saves her at the last minute and holds her saying, "Good soldier.  Good soldier..." (Miller  138).  Yindel sees the incident, and adds child endangerment to Batman's long list of crimes.  Batman comes over her radio, and informs her that the governor's life is in danger and it is up to Yindel to save him, because Batman doesn't have time to same him, too.
As Superman is assisting the U.S. troops against the Soviets, he ponders upon Batman's retirement.  The FBI had gotten involved in superhero affairs because to Batman/Bruce it had become a single man crusade.  Superman agreed to cooperate with the government, and they let him live.  Batman, in turn, he retired so that he was allowed to live.  Superman foresees the impending doom that will fall upon them now that the Batman is back.
Batman and Robin arrive after the Joker has already killed so many.  Robin takes in the scene, perhaps her friends are dead as well, and Batman ponders, "...a girl of thirteen breathes in sharply, suddenly, her innocence lost...it ends tonight, Joker..." (Miller 140).  Two people, Lana and Morrie, argue on the news about Batman.  It is stated that he has never killed anyone, but it is strange that the Joker awakened after Batman reappeared.
Batman and Robin split.  Robin goes after the bomb building villain with a doll bomb, and Batman chases the Joker.  Through the narration we see Batman's dark thoughts of his countless plans that he has constructed to kill the Joker.  Robin narrowly escapes the bomb maker's grasp, and he is decapitated on the roller coaster tracks.
Batman follows the Jokers through the amusement park, and gets shot by the Joker.  He keeps going because he cannot stop until the Joker is defeated.  The Joker manages to stab Batman, and Batman struggles to maintain control of himself as he twists the Joker's neck.  It is obvious that he wants to kill the Joker, but he stops short.  It would break his own moral code, but then the Joker mocks him saying that he didn't have the nerve.  They hear sirens, and the Joker says that it doesn't matter that he will be accused of killing him anyway.  The Joker then starts laughing and twists his own neck the rest of the way, killing himself.  Batman has lost a great deal of blood and is slowly dying in the water of The Tunnel of Love.