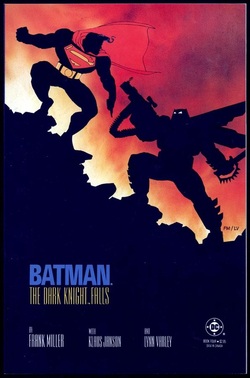 Courtesy of DC Comics
As Kelly and Alfred preform surgery on Bruce, he is having nightmares of being a masked madman, laughing away.  The next day, President Reagan comes on the TV and announces that the U.S. has won, but the Soviets have launched an attack.  Superman jumps to action and tries to divert or stop the warhead.  The missile is more than a nuke, it is created to send out an electromagnetic pulse to stop all electronics.  As the nuke goes off, Bruce's heart rate flat lines, but he wakes up and calls Clark an idiot for letting the government use and abuse him.  Batman knew about the effects of this weapon, the American's have one that is similar, the Cold-bringer.  It is also designed to do a massive amount of destruction to the environment.
Batman sets out for the stables.  He had a plan if this sort of incident happened, and he decides it is time to cleanse Gotham with brains and brawn instead of weapons.  The city is being engulfed in flames from a plane that fell from the sky, and chaos ensues.  Gordon is in the streets, caught up in the mess because he was out getting groceries for his wife.  He saves some civilians, and rushes off to find his wife, whom he fears is dead.
The Mutant prisoners escape, and Batman rounds up the Sons of Batman to help the city in flame.  Batman and crew get assistance from the mutants and start fighting the flames and controlling the chaos.  Gordon organizes others, as well, but still cannot find Sarah.
The blast has blocked the sun, Superman's source of power, and he is burning up.  By the power of the Earth, he manages to live and barely escape, but the damage is done.  Gotham is set for a nuclear winter, with no sun.  Gordon finds his wife, who was also out getting groceries.
Clark tells the President that Batman will never be brought in alive.  Oliver Queen, the Green Arrow, drops in to see Bruce.  He lost an arm because of Superman, and want to assist Batman.  He offers advice too late on how Batman should have kept a low profile instead of being a huge target and attracting media attention.  Oliver knows that they only way that the government will stop pursuing him now is to kill him.  Oliver explains, "I always knew it'd get down to you and the big blue schoolboy.  Planet's too big for the two of you..." (Miller 186).
As Bruce teaches Robin to ride, a flame comes from the sky and leaves a message that says, "Where?" and Bruce replies, "Crime Alley" (Miller 186).  Even though the streets are now safe, Batman prepares for battle, and reflects on the beginning when the bat took control of him.  He fought crime for thirty years, and is wondering how it will all end.  He takes a pill, and states that this will be his best trick, yet.
The U.S. army is in Gotham, and close off Crime Alley.  Robin isn't sure of Batman's plan and asks, "...you going to die or what?" , and Batman replies with "Figure I will..." (Miller 188).  Missiles greet Superman, because Batman wants to see if he is back to his full strength.  It is quickly known that he is not.  Back at Wayne Manor, Alfred starts the destruction sequence, and is reminiscent of Master Bruce's youth, and how he always wanted justice.
Robin arrives in the tank, and Superman is surprised to find such a young kid inside.  Batman has arrived as well, and plugs his new protection suit into what is left of the city's power.  He fires off a blast, and causes Superman to bleed.  Everything is coming full circle, because this is where Bruce's parents were murdered.  Superman unmasks Batman, and asks him to stop so he will live.  His response is, "You sold us out, Clark.  You gave them the power - - that should have been ours.  Just like your parents taught you to.  May parents...they taught me a different lesson...lying on this street...shaking in deep shock...dying for no reason at all...they showed me that the world only makes sense when you force it to..." (Miller 192).  The two continue to brawl, and Bruce has several broken ribs, a crushed wrist, and many more injuries as Superman just breaks a sweat.
The Green Arrow appears and draws an arrow of kryptonite, Superman's weakness, with his teeth.  Superman catches the arrow, but it does weaken him.  He voices his concern for Bruce's heart, but Batman wails on him replying that, "...this... is the end...for both of us...we could have changed the world...now...look at us...I've become a political liability...and you...you're a joke...I want... you to remember...the one who beat you..." (Miller 195).  After that, Bruce's heart stops.  The clock strikes twelve, and the Wayne Manor and Bat Cave explode.  Alfred suffers a massive stroke and dies.  Superman holds the body of his old friend, and will not let the police take it away.  The following newscast tells the public that Batman was identified to be Bruce Wayne, and is now dead.  The explosion left now trace or clues to be found, and his bank accounts were empty.  Kent attends the funeral, and as he leaves, hears a heartbeat from the grave.  He winks at Robin, and leaves.
The story ends with Bruce Wayne and Robin in the cave, surrounded by the Sons of Batman and the Green Arrow.  He is putting a new plan into motion to build an army "to bring sense to a world plagued by thieves and murders" and decides that, "This will be a good life...good enough" (Miller 199).  He will keep quiet in order to keep fighting against crime.